Perspective refers to the relationship of imaged objects in a photograph. This includes their relative positions and sizes and the space between them. In other words, perspective in the composition of a photograph is the way real three-dimensional objects are pictured in a photograph that has a two-dimensional plane. In photography, perspective is another illusion you use to produce photographs of quality composition. When you are making pictures, the camera always creates perspective. Because a camera automatically produces perspective, many novice photographers believe there is no need to know much about it. This attitude is far from correct. When you know the principles of perspective and skillfully apply them, the photographs you produce show a good rendition of the subject's form and shape, and the viewer is given the sensation of volume, space, depth, and distance. Additionally, the photographer can manipulate perspective to change the illusion of space and distance by either expanding or compressing these factors, therefore providing a sense of scale within the picture.

The human eye judges distance by the way elements within a scene diminish in size, and the angle at which lines and planes converge. This is called linear perspective. The distance between camera and subject and the lens focal length are critical factors affecting linear perspective. This perspective changes as the camera position or viewpoint changes. From a given position, changing only the lens focal length, and not the camera position, does not change the actual viewpoint, but may change the apparent viewpoint.

Fisheye lenses and the lenses used on panoramic cameras produce a false perspective. A panoramic lens produces panoramic or cylindrical perspective. In other words, all straight horizontal lines at the lens axis level are recorded as straight lines, and all other straight horizontal lines either above or below the lens axis level are reproduced as curved lines. The other false perspective is produced by a fisheye lens in which all straight lines in the subject are imaged as curved lines toward the edges of the picture.

Another clue to distance in a photograph is overlap perspective. When subjects within the picture are on about the same line of sight, those objects closer to the camera viewpoint overlap more distant objects and partially hide them. It is obvious to the viewer that the partially obstructed object is behind the unobstructed object. This overlap is repeated many times within the picture and gives the viewer a sense of depth and a perception of the relative distance of objects.

Through the experience of vision, you are aware of the size of many common objects, such as people, trees, cars, buildings, and animals; for example, you are aware that most adults are about 5 to 6 feet tall; therefore, when two people are shown in a picture and one appears twice as tall as the other, you cannot assume that one is in reality taller than the other. Instead you assume the taller person is closer and the shorter person farther away from the camera viewpoint. In this same manner, you make a size relationship evaluation of all familiar objects. Thus you can make a distance determination from this size relationship evaluation. The farther away an object is from the viewpoint, the smaller it appears; therefore, when subjects of familiar size are included in a photograph, they help to establish the scale of the picture (fig. 5-22). Scale helps the viewer determine or visualize the actual size or relative size of the objects in the picture.

When a subject is lighted with very diffised light, the three-dimensional form or volume of the subject is difficult to perceive because of the lack of distinct shadows. If, on the other hand, subjects are lighted with strong directional light from angles that cause part of the subject to be fully lighted and other parts to be in shadow, a visual clue of the subject's form or volume is provided When a number of such objects are included within the picture area, the perception of form, volume, and depth is increased. When front or side lighting is used, the length, depth, and shape of the shadows cast on the ground provide a perspective of each object's volume. Also, the distance between shadows cast on the ground helps you to perceive the overall depth of the scene.

For all practical purposes, air is transparent. For most photography, this is fundamentally true; however, when pictures are made of subjects at great distances, the air is actually less than fully transparent. This is because air contains very fine particles of water vapor, dust, smoke, and so on. These particles scatter light and change its direction. The presence of scattering shows distant subjects in pictures as having a veil or haze. The appearance or effect of this scattering is proportional to the distance of the objects from the viewpoint. The greater the distance, the greater the amount of veiling or haze (fig. 5-23). The effects of this scattering of light are additive, but vary with atmospheric conditions.In atmospheric perspective several factors must be considered:
Color is defined by three qualities: hue (the actual wavelength), saturation (intensity or chroma), and brightness (reflective). A pure hue is fully saturated or undiluted. When a hue is desaturated or diluted, it is no longer pure but has gray intermingled with it. The actual colors of a distant scene appear to have less color saturation, because the light is scattered and also because of the overall presence of the desaturated (diluted) blue light of aerial haze. The original scene colors appear less saturated or pure when seen or photographed from a distance than from close-up; therefore, color saturation or desaturation allows the viewer to perceive distance in a color photograph. 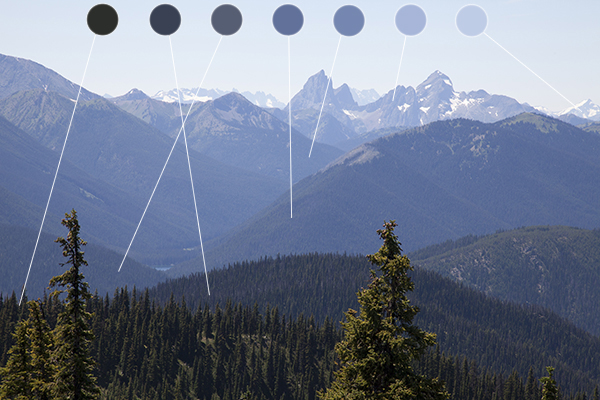 Foreshortening is the visual effect or optical illusion that causes an object or distance to appear shorter than it actually is because it is angled toward the viewer, such as the arm on the image below. Additionally, an object is often not scaled evenly: a circle often appears as an ellipse and a square can appear as a trapezoid. 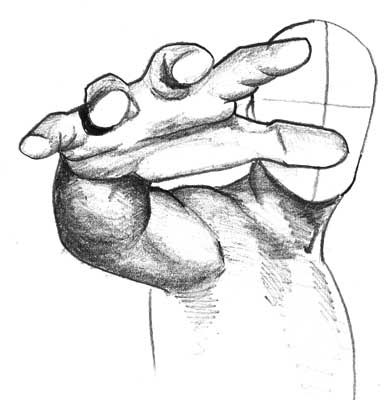 Now that you have checked out the content, why not stop by the assignments page and complete the assignments for week 3?
Content is courtesy of photoinf.com (Links to an external site.)